Welcome to our new website for all your kaiju news and updates! 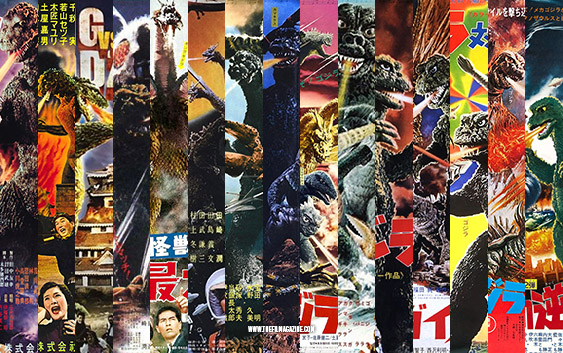 Hello everyone and welcome to another Kaiju Karnage blog post! Today I decided to rank and rate all Showa era Godzilla films. Keep in mind that nostalgia plays a big factor in my ranking because I grew up on the old school Godzilla films be it watching them on VHS or seeing them in a hotel while travelling with my father. While most consider this era of Godzilla to be terrible films that are borderline unwatchable, I have always looked upon this particular era with joy and wonderful memories.

The Showa era has 15 Godzilla films and there are only a select few that I will openly say that I do not care for. If you would like to hear my breakdown on each film, I have done a podcast episode on each one of them so feel free to check those out. With all of that said, let's jump straight into the list!

Let's be honest here. If I was a betting man, I'd wager that most diehard Godzilla fans rank this film pretty low on their list of favorites. This film is probably the most unique of all Godzilla films considering that it takes place in its own continuity, separate from all other films in the era. It takes place in the "real world" where all kaiju are fictional and the only exposure we got to the iconic monsters are through the imagination or dreams of a lonely boy, Ichiro Mitsuki. The film was directed by famed director, Ishiro Honda, the same man that directed the original Godzilla film in 1954. In this film, he tackled major social issues that are still prevalent to this day in 2022, such as loneliness, bullying and acceptance. While Honda considers this one of his all time favorite films that he directed, not even he could save this film. From extensive stock footage, to very little kaiju screentime, the only saving grace that this film has is its very short runtime at just over an hour.

This film is the direct sequel to the original film released just a year later after its massive success. This was only the second film in the franchise, but it was the first to feature two kaiju battling it out as well as the first appearance of fan favorite and Godzilla's eventual best friend, Anguirus. The original Japanese version of this film is actually halfway decent to me, but it was not my first exposure to the film. There was a heavily edited "Americanized" version of this movie that was released in 1959 in the States titled Gigantis the Fire Monster, which is the version that I unfortunately originally saw. What has always puzzled me about the changes made to the movie in the edited version is that the Americanized version of the original 1954 film had already been released in the States in 1956, so there was no need to make some of the significant changes such as Godzilla's name and his roar. Ishiro Honda was committed to other projects and was unable to return to direct and work his magic on this mess of a film.

Ah, yes. The film that introduced audiences worldwide to Godzilla's infamous son, Minilla. This creature was created to try and bring in the "couple crowd" for date nights, because they wanted to try and bring in more women to be fans of the franchise, so they attempted to make something that they would find cute and adorable. The only problem is that the creature that they created is uglier than sin. The human side of the film is oddly fascinating, and I found myself far more interested in what the humans were doing instead of being interested in Godzilla or his gremlin son. This film was directed by Jun Fukuda and was made in a time where Toho was slashing budgets, so this film had an island setting, the second to do so, as to save money on building sets.

Now hold on! Before you jump me from putting this film so far down on my list, please understand that I do truly enjoy this movie. There just so happens to be more that I enjoy more than this one. Destroy all Monsters was supposed to bring the Godzilla franchise to an end because Toho believed that Big G had run his course. They intended to make a spectacular crossover film with as many monsters as possible to send Godzilla his big farewell. While a chunk of Toho's monster lineup made it into the movie, there was supposed to be more including, but not limited to King Kong and Ebirah. After the success of the film, Toho decided to keep the franchise going, but could not recapture the magic that Godzilla had achieved in past films.

The film that gave us one of Godzilla's most fearsome enemies! Not only were fans introduced to the destructive Mechagodzilla, they were also introduced to fan favorite kaiju, King Caesar. The final Godzilla film of the Showa era to be directed by Jun Fukuda, this film has always been an enjoyable watch for me.

This movie was not initially well received by the masses, but overtime has gained a cult following, myself included. Just like Godzilla represented the dangers of nuclear energy in the original film, Hedorah represents the dangers of the pollution of our planet. The only hangups that I have with this movie are the music and the fact Godzilla showed that he is capable of flight in the most ridiculous manner. Most fans consider the infamous tail slide dropkick from Megalon to be the low point of the franchise, but I easily consider the flight of Big G to be the lowest of the low.

Ishiro Honda returns to the franchise to direct what would become the final film of the Showa era. Story aside, I love the way this film was shot! The camera angles are spectacular and the special effects were top notch! This film has probably the best camera work of the Showa era.

After the success of King Kong vs Godzilla two years prior, Toho decided to go with the "versus" scenario moving forward with the franchise. They looked into their own library to use the Queen of the Monsters as Godzilla's next opponent in Mothra. Alot of secrecy went into the making of this film for its release in the US, going as far as to title it Godzilla vs The Thing as to keep Mothra under wraps. This is a fantastic movie and us one of the earliest Godzilla films I ever watched. This was the second film I ever saw with Mothra in it and I remember as a small child being mad that Godzilla "lost to a butterfly", but in my adult years, I have come to be a big fan of Mothra and I have much more respect for her.

This is another one of the earliest Godzilla films I ever watched and this was the first film to introduce me to what would become my favorite Godzillaverse monster in King Ghidorah. Godzilla has nearly made the full transition to hero by this time in the franchise and Toho wanted to add more comedy to the films, hence the victory dance that Godzilla performs in the film. This was also a coproduction between Toho and UPA and saw the return of Akira Takarada to the franchise, his first time back since playing the main character in the original film.

This film introduces fans to Gigan and brings back the mighty King Ghidorah. This is one of my favorites because it features a team up between Godzilla and Anguirus and I'm always done to get some more Anguirus action! Originally going to be titled The Return of King Ghidorah and was going to feature Megalon, the title was ultimately changed and Megalon would star in his own film just one year later.

Released in the same year as Mothra vs Godzilla, this film marked the grand first appearance of King Ghidorah. This film also marked the first time Godzilla showed heroic characteristics by teaming up with Rodan and Mothra. The final fight has always been one of my favorites in the entire era.

Yes, I am aware of how notoriously bad this film is. No, I do not care. I love this movie with everything I am. It is also one of the earliest films I saw as it was a gift from my father on VHS. I watched this film religiously as a kid and still watch it pretty regularly as an adult. This film is significant in two things; the introduction of Jet Jaguar and the infamous tail slide dropkick from Godzilla! Cheese and all, I adore this movie!

Keep in mind this is a list of my favorite Showa era films, not which ones I think are the best. If we're talking the best, this film has that spot tightly clinched. I grew up watching the Americanized Veracruz of this film and it was many years later until I watched the original cut in all its glory. This film is a masterpiece and I consider it one of the best of all time.

There are two Godzilla films that I have seen more than any others and they are this one here and the film that has the number one spot. This was the film that introduced me to Mothra and was only the second Godzilla film I ever watched. This movie is available on YouTube with the original english dub and I watch it very frequently. It is my favorite role that Akira Takarada has played to this day.

My all time favorite Showa era Godzilla film and the movie that introduced me to Godzilla himself. I was already a King Kong fan and that's why this movie was gifted to me and it turned me into a lifelong fan. This film marked the first time either monster appeared in a color film and I love both the American version and the Japanese version. This isn't just my favorite Showa era film, it's also in contention to be my favorite Godzilla film, period.

Well, that's it everyone! My official ranking of the Showa era Godzilla films. I hope you enjoyed the read and be sure to message me your own list so we can compare. Until next time everyone!

My journey as a kaiju fan

Hello everyone and thank you for checking out my website and very first blog post. I decided to write this to give everyone an idea as to how I became a …

Email has been submitted.